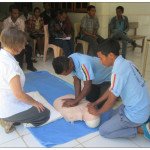 We departed to Darwin on a cold Sydney morning in early July. We then made the short trip to Dili on an even earlier morning flight the following day. Our contact/ coordinator/guide Eddie was waiting for us and apart from some issues with older US dollar notes, there were no arrival problems. We were driven up the mountains towards the clinic where we were to stay for 2 weeks. The views were magnificent and almost made us overlook the poor state of the roads, which are being repaired but require a lot of support, especially after each wet season.

We arrived to the cool, clear air of the Community Clinic in Ermera district after about 3.5 h with some stops, including an introduction to the local police chief.  I was pleased to discover that electricity had arrived in the area and that we even had proper bathrooms with hot showers, after planning for something more basic. Our accommodation was in a little room, in a recycled container, but this was quite adequate and private. The mountain area was a little cooler than I had anticipated, especially once the sun was down, but the days were pleasant and dry. We shared meals in the common dining room, with plenty of local grown and processed coffee available at all times. This was quite delicious and I already miss it! We also had fresh bread baked each morning for breakfast. Meals were very simple, with plenty of rice, locally grown vegetables but little protein. I did enjoy having a cook for the 2 weeks however!

Work at the clinic, just down from the accommodation buildings, started at 9 am, with outpatients. I was lucky to start this by sitting in with the recently recruited Cuban trained doctor, as I had not yet discovered the Handbook of common conditions and available treatments! Communication was not always easy; I was able to speak Portuguese to the local Doctor who spoke Spanish and Tetum. One of the helpers spoke some English and Tetum so helped me translate when I eventually made it on my own. We saw up to 35 patients in the morning, combined. This was a relatively quiet time, as it was coffee picking season and many are working hard as they make most of their income in this short time of the year. The conditions treated varied from simple respiratory infections, to trauma and burns, penetrating foot injuries and a variety of musculoskeletal conditions. TB was common and even Leprosy related damage appeared at this little clinic. Paediatric and gynaecological/obstetric issues were very prevalent, as women tend to have many pregnancies and >50%of the population in the country is under 16 years of age. I taught a First Aid Basic Session to local teachers and students. I even delivered a baby at 2 am, with a lot of trepidation, when the resident midwife was away at a refresher course! Afternoons were quieter, with 2-4pm clinic only getting half the attendance of the morning, if that. Transport issues and coffee picking period accounted for this.

The investigations and treatments available were very limited. The closest larger medical facility with inpatient stay was only 16 km- but close to 1 hr – away due to poor state of the roads. This was difficult to access after dark. Anything more serious had to be transferred to Dili, close to 3 hrs by road. I spent some time reading the handbook, organising the clinic emergency room 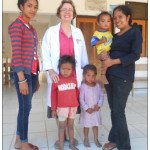 , talking to the staff and learning about the local issues and culture. I had a chance to do long walks up the mountain and interact with local kids, that soon recognised me as Dr. Maria. I participated in the local fete and processions on dusty roads, made bread and occasionally had an Internet connection to communicate with home! My father was kept busy fixing the electrical problems, the washing machines and generators, as well as teaching the local handyman how to order spare parts over the internet! We were rewarded with gratitude and lots of smiles, as well as local coffee and a Taís, the traditional woven cloth. When we made our way back to Dili, for the other part of my medical placement, we did so with regret and a desire to continue some of the work and the association with these needy but delightful people who probably taught us more about resilience and strength than what we taught them. We were invited to return, and I sincerely hope I will.

Thank you to Eddie, our multilingual philosopher, diplomat and helper for having provided so much help, information and easing our cultural exposure and experience. Eddie is a great ambassador and example for his people. Thank you DocTours for providing the opportunity and the logistical help which made our time special indeed!