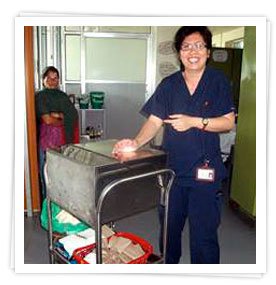 I first saw DocTours advertisement in the February 2013 issue of “The Lamp”- New South Wales Nurses and Midwives Association magazine. The first thought that came to mind was I would love to experience my first nursing volunteer work in a totally different environment and take a break from my usual mundane nursing work. I chose the 2 week volunteer program in Nepal followed by a 5 day Bhutan holiday. Before I knew it, I was on the road to discovery of what would be an unforgettable experience of a lifetime.

At Tribhuvan Airport, I was met by a local guide transfer who drove me to the tourist ghetto of Thamel where I spent my first night in Hotel Shakti. Feelings of sadness, disappointment, shock and fear enveloped me as Kathmandu’s under-developed infrastructure laid before my eyes. But I mustered courage to march on with an open mind. I stayed with a Nepali family in the Kavre district, 26 km east of Kathmandu. Bijuli and Sunita and son, Philip live in a 2 storey shop house. I stayed in one of their 3 bedrooms reserved for volunteer workers.

At times, I had to endure cold showers as the bathroom’s hot water system only worked intermittently and the “flushed” toilet required manual flushing with buckets of water. Power cuts happened twice daily; day and evening for a total of 4 hours. My staple food consisted of “roti”, Dhal Bhaat (lentils and rice), pokara (deep fried potatoes to onions and cabbages), fresh cucumbers and tomatoes. We also had a buffalo meat stuffed “Momos (dumplings) Party”. It was a 5 minute walk to the local hospital where I was placed in the general surgery and medical wards. Nepali children were a friendly lot as they greeted “Namaste” or “Hello” as I walked to work.

My work hours were from 8 am till 3 pm. As I walked into the hospital each morning, I was greeted by the antiseptic smell of Dettol. The registered nurses (RN) known as “staff nurses” started their 12 hour day shift at 7 am with bed-making, checking their patients and cleaning bedside tables and nursing stations with Dettol before settling down for breakfast. Doctor’s round was between 8.30-10 am. The consultant and resident medical officer (RMO) with the team leader RN spoke in Nepali with the patients. Thankfully, documentation was in English. I salute the multi-tasked RNs who were also skilled in venepuncture and cannulation as they executed a lot of the RMO’s work including taking consents for surgeries!

Nursing was task-oriented and different from what I had been practising. I was the only volunteer RN at that time. My tasks involved intravenous (I.V.) medication administration, wound dressings and taking vital signs. My shock and fear was transported to the hospital setting too. Disposable syringes and needles were re-used and re-capped, disposable gloves were infrequently worn and the discharge beds were not frequently cleaned. The emergency trolley oxygen masks were broken and the pre-packed endotracheal tubes were expired for a few years.

The wards only stocked basic supplies such as dressing materials from the central sterilisation department and Alcohol, Normal Saline 0.9% and Betadine solutions. Patients had to purchase items such as thermometers, medications, syringes and needles, I.V. administration sets and crepe bandages from pharmacy for their own use during hospitalisation. Only one set of sphygmomanometer and stethoscope was available in the surgical and medical wards for the 12 to 30 patients respectively!

Patients’ hygiene care was implemented by family members and one member was required to stay in the hospital 24 hours to report on changes in patient condition. I was shocked that patients did not wear Identification bracelets. I had to ask “Tapaiiko Naam Ke Ho?” (What is your name?) to be sure it was the right patient. Most surgical ward beds’ mechanics were broken so family members were involved in lifting post-surgery patients with RNs from theatre trolleys onto ward beds. Manual Handling and Occupational Health & Safety policies were non-existent.

A surgical patient called Rama, to whom I spoke my first Nepali words:”Meero Naam Jennifer (My name is Jennifer), laughed at me as she said my name. My speaking Nepali also ignited a burst of laughter from the other patients who all grew to like me. Rama’s pain threshold was zero each time she had her thigh wound packed as she yelled and squeezed my hand. Surgical ward patients consisted of appendectomy, haemorrhoidectomy, incision and drainage and scrotal hydrocele cases. A delivery observation in the labour room led me to become a participant in restraining and holding the mother down as she underwent labour pain and stress. She was endangering herself and the unborn baby by standing on the narrow delivery table.

We had no calming effects on her. She refused to comply with the 2 midwives and 2 midwifery students’ instructions. There were a lot of shouting and screaming in Nepali in the delivery room! Finally, the O & G doctor was called in again to the rescue and the patient agreed to a caesarean. Unfortunately, I did not proceed to theatre to see the caesarean as I was so tired after the amusing one hour incident. Chronic obstructive pulmonary diseases, Pneumonia, Respiratory tract infection (to rule out Tuberculosis), Fever for investigations (to rule out Malaria), Gastroenteritis (diarrhoea and vomiting), Uncontrolled Hypertension and Diabetes, Urinary Tract Infection were prevalent in the busy medical ward. Five foot tall oxygen cylinders occupied next to each respiratory patient’s bed. I also visited Intensive Care Unit (ICU).

Each week, there were 1 to 3 suicidal cases in ICU involving young Nepali men and women ingesting insecticides. I happened to see this restrained, 33 year old man who ingested 20 mls of organophosphate pesticide. He was tachycardic, semi-conscious, restless and jerking in his bed. Reason for suicides as informed by the nurses and my homestay family were related to family problems. Cases were common and uninvestigated. I also participated in a Dental Care and Handwashing Hygiene Education at Shree Baleshwor High School in the nearby village of Panauti. A German volunteer dentist and a third year Belgian volunteer medical student were also involved. I demonstrated correct hand washing techniques to school children between 7-10 years of age.

It was an eye-opening experience for me from the start till the end. I was learning from the nurses and practising different skills due to working with limited resources. The nurses who had not seen my disposable aprons or Betadine-impregnated cotton swab sticks before, were a friendly bunch who all seemed to work with minimal fuss and complaints. But through our conversations, I could sense their longing for an overseas migration for a better pay, lifestyle and working condition.