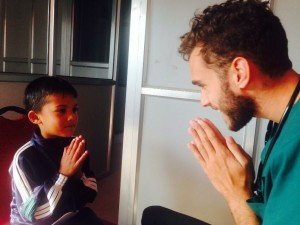 Over the months of October and November, I had the chance to spend four weeks working in Nepal as part of a DocTours Voluntary Program. While over there I was hosted by the Timilia family; Bijuli, Sunita and their son Phillip. They are the most beautiful people and you couldn’t ask for a better platform for exploring a new country. Their home was situated in Banepa, a small town 30km east of Kathmandu and the local Hospital, an icon of Banepa, sat just behind their home positioned against the base of a mountain. When I landed in Kathmandu Airport I was greeted by Bijuli and Sunita who welcomed me with some local traditions and a cab ride home. My first impression could only be descried as ‘culture shock’… and that’s coming from someone who has experienced many parts of southeast Asia. Nepal is nothing like anything I have ever seen before.

For my first day at the hospital, I met with the hospital CEO and he was happy for me to work/do whatever I wanted. I found that some of my most valuable learning experiences in Nepal were outside of the hospital and so I really appreciated the flexibility to come and go. Based in Orthopaedics I would generally work 6 days per week with a good mix of clinic and theatre. I also ventured in and out of Emergency where I would catch the odd case; assisting with one resuscitation of a 2 year old child that had been stung by killer bees and subsequently gone into disseminated intravascular coagulation. There are certain things you’ll see in Nepal that just don’t happen back home. That weekend I went to Kathmandu for a bit of good ol’ fashion tourism with the help of my host father Bijuli who took the role of designated photographer.

My second weekend we went to Chitwan National Park, fully organised by our hosts. Chitwan was absolutely amazing! The jungle there includes just about every creature you could hope for; crocodiles, rhinos, elephants, leeches, wild pigs, tigers, leopards… the last two we didn’t actually see but that was probably for the best. After all we were just on foot (no jeeps) and our ‘protection’ was a bamboo stick. Good luck fending off a tiger with that! I was blown away by the elephant ride which I honestly was not that keen to do. The beauty of this elephant ride, unlike the last time I did it in Indonesia, is that it allowed us to walk within metres of animals like rhino and white-spotted deer without them knowing we were there. Incredible.

After we returned from Chitwan, we being myself and Tessa a physiotherapist also travelling with DocTours, the Timilia family and the two of us ventured further east to a town called Dolalghat where we had plans to oversee the construction of ten new homes. Twenty homes were lost in Fishermans’ Village after the earthquake and, with the help of Rotary Northbridge, our host Bijuli had spent the previous six months organising to have ten homes rebuilt and given to the ten poorest of those families. We camped out in the village for two days and completed four houses which was the first instalment of the project. It was truly amazing (and very challenging) camping out in a village with people so far removed from western tourism and western culture. They cooked us dinner in the evening and despite the humble conditions the food was actually so delicious. It was also really interesting to learn the practical issues you face when actually trying to rebuild homes – with the nearest road ending far from the village and the locals needing to carry steel panels uphill 100m of mountain terrain. It is certainly not ‘to-your-door’ delivery and this made me realise just how difficult it would have been to conduct rescue efforts after the quake where most villages are speckled across the land and often not connected by road. Tessa, the other volunteer, spent time in a village in West Nepal that was a 10hr walk to the nearest road. I can’t imagine someone walking that distance while actually unwell and needing a hospitalisation.

We returned from Dolalghat to start the celebrations for the festival of Diwali – which for the culturally-illiterate like myself means basically Christmas for Hindus. Buildings are covered in (christmas) lights, children go door-to-door singing with candles and in the evenings we feast! Yes, evenings with a capital ’S’! Unlike christmas this party goes for a whole week. One of those days we dressed up in full Nepali kit and attire and went into Thamel for the rituals. Tessa and I ended up spending a large portion of the day taking photos with people as it seems most Nepali thought two Australians dressed like locals is worthy of an Instagram.

My last week was spent back at the hospital but with two days taken for school visits. We ran a medical clinic at one school where I saw 100 children in 5 hours – which is 20 students an hour or 1 student per 3 minutes… talk about fast consults! We set up a rather effective production line with Tessa taking vitals and doing weight and height followed by me examining the children. Lots of swimmers’ ear, tonsillitis and other simple conditions. A few of the children were quite unwell and we sent them straight to hospital. I’d say that my one day running the school clinic was probably the most useful thing I did in my time in Nepal. Our second day off was visiting a rural school to donate some equipment. Tessa had purchased a computer for them which I thought was such a clever gift. You realise when you’re there that the solution to so many issues lies in education and the exposure even to one shared computer could make a world of difference. The Rotary also donated funds to build ten new study tables/benches which were much needed. The old ones they were using were half broken. What really touched me was the appreciation we received from the school community. They held a ceremony and presented us with framed certificates (a feat, considering they don’t have a computer!) and provided us with an amazing lunch. It made me realise just significant our small contribution could be.

The conditions in Nepal are as poor as it gets. As one doctor put it, “this is not third-world medicine, this is fifth-world medicine.” Staying with locals and living away from the city really gave me an insight into what life is actually like for the people there. I couldn’t be more appreciative of all the effort that the Timilia family went through to make my trip an action-packed authentic Nepal experience. It has left me utterly inspired. I am now in the process of launching a social enterprise here in Australia that will allow people to browse, share, and sponsor different aid projects like the things I was involved in. It is so amazing how far a small bit of money can go when put in the right hands; a family taken from a bamboo and plastic shelter to their own earthquake-proof home for US$700, or perhaps rebuilding a school for a whole community for US$3000, or giving a school a shared computer for US$300. Our focus will be sharing the story and providing an honest and transparent method of making these projects happen.

As a final note, I couldn’t have been happier with the way the trip went. I feel so comfortable with Nepal now and I am already looking forward to returning with the hope to do some trekking! DocTours was incredible. I have no complains apart from the fact that I need more holidays to properly explore all your other destinations. Thank you for the good times. 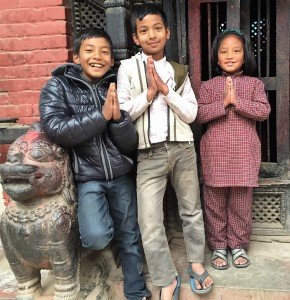